HFF does not consider unsolicited requests for funds and grant applications are provided by invitation only.

Our Founder and History 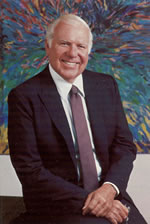 As a successful entrepreneur and business man, for many years Frank Hickey made charitable donations to existing causes and provided funds for projects in the name and memory of his family.

He became actively involved in philanthropy in the late 1980’s and 1990’s as a board member and donor to several charitable organizations which provided food, shelter, medical relief, health care training, and education to those in need in the U.S. and around the world.

This involvement continued throughout the remainder of his life.

Much of HFF’s conceptual framework resulted directly from the influences of the organizations Mr. Hickey supported and with which he was deeply committed.

Although it had existed in spirit through Mr. Hickey’s philanthropic involvement with other charitable organizations over the years, the Hickey Family Foundation was formally established in March 2004 by Declaration of Trust under the laws of the State of Arizona.

It is a wholly charitable trust, organized and operated exclusively for charitable purposes pursuing the specific missions of the Hickey Family Foundation Trust.